After a couple of weeks without blogging, I’m back. For this post, I will post some of the images I took on my phone camera over the duration of the London 2012 Olympics. I managed to take over 1500 on the phone, so they will probably be uploaded over the course of a few days so watch this space!….

Here are a few to get started with:

This one was taken the day before the Olympics officially started, on July 26th, as the Olympic torch was carried through Whitehall.

The huge crowds lining the route start to disperse in all directions after the torch has passed.

City workers enjoy the party atmosphere at the end of the day with drinks outside.

The royal barge Gloriana arrives opposite city hall with the Olympic flame onboard. It would later make it’s final journey to the Olympic Stadium in Stratford.

Tourists gather round the Olympic countdown clock in Trafalgar Square as it counts down the final few hours until the Olympics.

At 20:12pm on 27th July, the Royal Air Force Red Arrows team fly over the Olympic stadium, shortly followed by Victoria park, where I took this photo before watching the opening ceremony on a big screen. 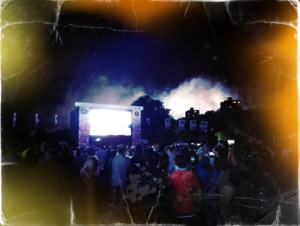 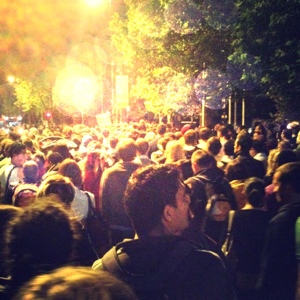 In the early hours of the morning, thousands of people descend on London’s transport network ready to make their way back to their Hotels, homes etc.

During day 1&2 of the games, I was watching the Mens & Womens cycling road races. This was a view from where I was standing, Buckingham Palace & the Mall. All for free as well! 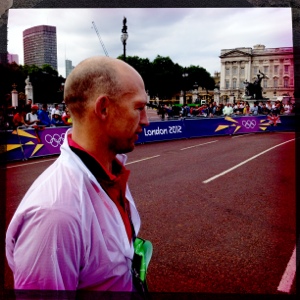 Being a very high profile event, lots of sports personalities and well known people were about. Here is Matt Dawson, a former England rugby player, who was chatting to some spectators. 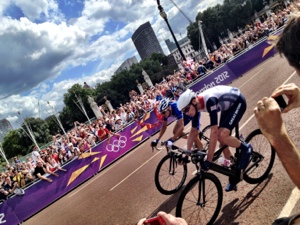 Some of the Male cyclists sprint onto the Mall as they come to the end of the Road race. 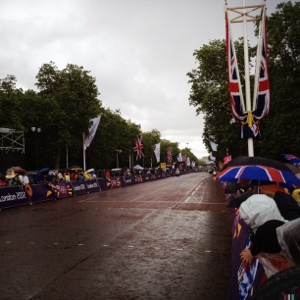 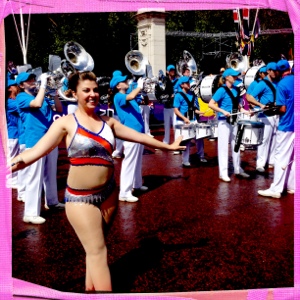 Taking advantage of a dry spell on the Mall, the University of Florida Gator Band marched up and down entertaining the crowds as they patiently waited for the female cyclists to return. 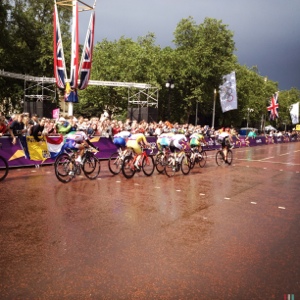 The female cyclists return back to the mall in the rain to finish the road race. The crowds despite the bad weather were still out in force. 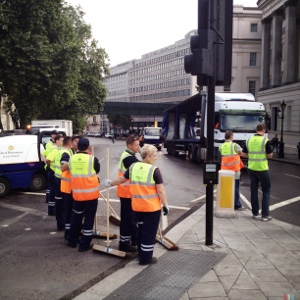 Cleaning crews were out in force across London during the games, keeping the city tidy & looking good for everyone.

Beautiful sunny weather greeted me as I entered the Olympic park in Stratford. 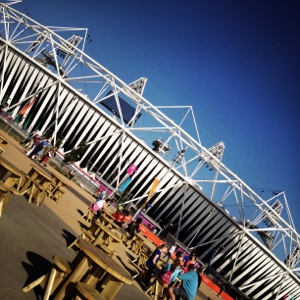 This was the view as I had breakfast before exploring the Olympic park.

The ArcelorMittal orbit observation tower is seen in the background as I capture some of the landscaping around the park. The planting and variety of flowers etc in the park was amazing to look at, especially in this bright sunny weather! 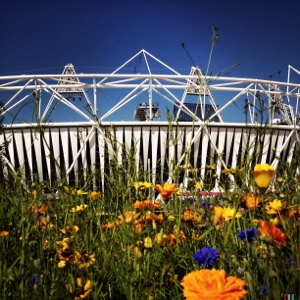 Gorgeous green planted meadows surround the Olympic stadium as it basks in the morning sunshine.

Rather appropriate Olympic themed text on display outside the Copper Box arena. 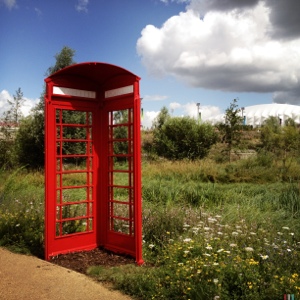 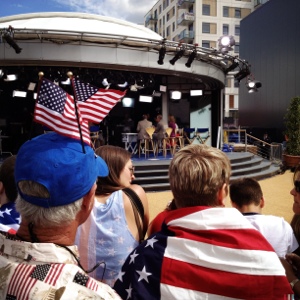 Broadcaster NBC bring the USA to a corner of the Olympic park, sharing their Olympic medal success with the world.

The riverbank arena is soaked with water before a hockey match. If it is windy when this happens, you’re not in a great place if you are a photographer or someone in the first few rows! 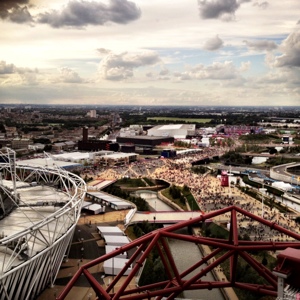 The view north across the Olympic park from the Orbit observation tower. The views all around from it were impressive, I also saw the inside of the stadium being prepared for Athletics events after the Opening Ceremony. 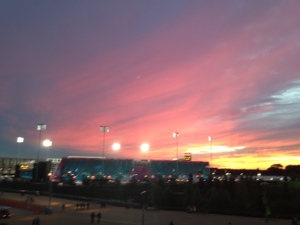 The sun sets on another day of the London Olympics, but the lights take over and the sport continues into the night. 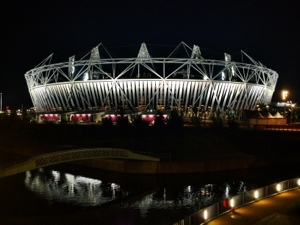 The Olympic stadium is lit up as the day comes to an end and people start heading home. 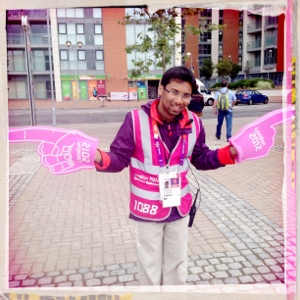 One of the amazing volunteers in London helping direct spectators around the city to their various destinations.

The following day, I wasn’t attending any events, so I went to the live site at Hyde park to watch some live music acts and some sports on the various big screens around the park. 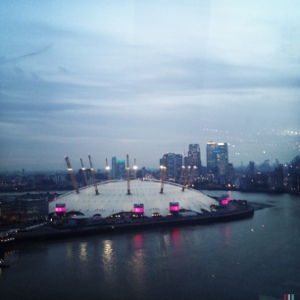 With a bit of free time on my hands, I decided to go on the Cable car early in the evening, that provided great 360 degree views. Pictured here is the North Greenwich arena (02) as the lights started to take over as darkness descended. The olympic stadium and orbit are also clearly visible from the cable car. 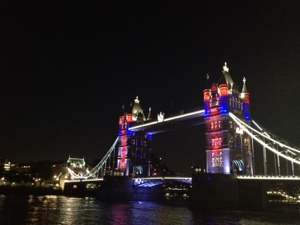 To coincide with the Olympics, lots of bridges up and down the Thames in London were lit up with different lights at night. Tower bridge had some beautiful changing colours illuminating it. 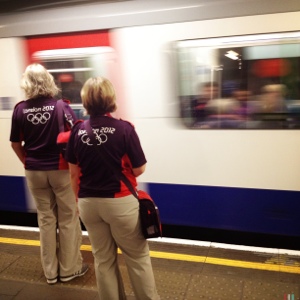 Gamesmakers embark on the London Underground to begin their journey home.

Crowds line the Cycling time trial route close to Hampton Court Palace to cheer on the Male & Female cyclists, including Bradley Wiggins & Chris Froome who won Gold and Bronze medals in this event. The noise was amazing as cyclists rushed past.

Later that day, I went to Horseguards parade, site of the Olympic Beach Volleyball, to watch the sport and be part of the amazing carnival atmosphere. The crowd participation here was amazing, one of the highlights of the games for many. 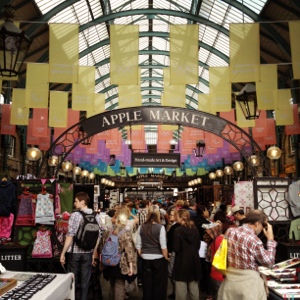 Covent Garden in Central London was brightly decorated with Olympic and Paralympic banners. 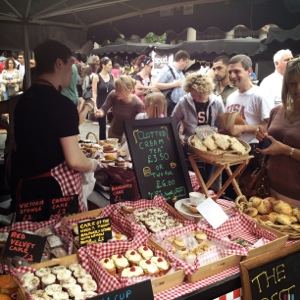 The market stalls at covent garden were selling things like hot cakes! 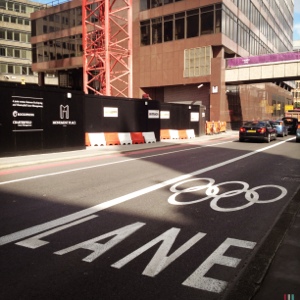 The olympic lanes served their purpose well in the city, but ended up being phased out and restrictions relaxed as traffic in the capital wasnt as bad as initially feared.

The olympic feelgood factor wasnt just restricted to London, it was all over the UK and even on the street signs here in Weymouth, where the Olympic Sailing was taking place!

The sun shone on Weymouth as crowds flocked in their droves to the beach live site and the ticketed area on the Nothe.

Meanwhile at another of the free events, the race walks, crowds lined the route along the Mall and Constitution hill. Every athlete getting cheered on as they passed by.

Brazilian ladies dance through Leicester square as they help give Londoners and the international community a taste of Brazil the day before Rio is handed the Olympic flag at the Closing Ceremony.